Medieval meatrolls for the win! - Journeying through a medieval recipe

Medievals ate massive joints of meat straight off of the bone while wiping their faces on sleeves and tablecloth and tossing the bones on the floor - just like Hollywood History class has taught us, right?

By contrast to this charming set of imagery, Medieval cuisine was immensely varied, complex and sophisticated, accompanied by a detailed set of rules of table etiquette, including which fingers to use with which types of food, rules for washing fingers before, between and after eating, and in some cases quasi-religious rituals of service intended to recall the Last Supper and other Church ceremonies. 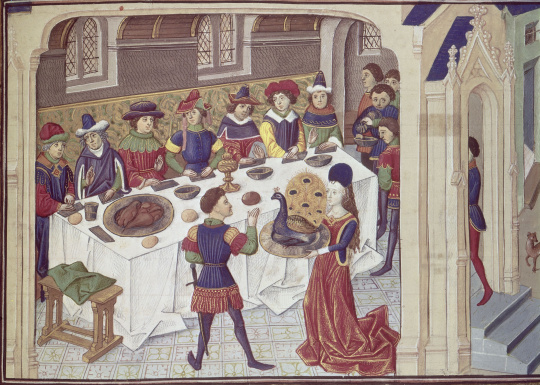 Medieval dishes across Europe consisted of exotic flavor combinations and intense spices from the East, with sweet, sour and savory all combined. So let us explore one original medieval recipe and attempt to recreate it using my ill-equipped modern, yet dated kitchen!

The dish we are exploring today is called Allowes de Mutton. It hails from a collection of recipes ascribed to the Head Cook of King Richard the II, referred to in the oldest manuscript copy as a Forme of Cury.

Note that the medieval word “cury” has nothing to do with Indian “curry” – the medieval English word is a corruption of the Middle French “cuire”, to cook. In other words, “The manner of cooking”.

This recipe comes from the version found in Harleian Manuscript 4016, which is supposedly housed in the British Library, but I have been unable to find a record of it actually being there, or even a digital verison of the original manuscript. If you know where to find a digital record of this original, please let me know in the comments below!

Speaking of manuscripts, sidenote – especially for people in organizations that abuse the word “scroll” - the earlier version of a Forme of Cury is in fact a proper scroll, with leaves sewn together and stored as a roll! Now back to our source. The original recipe reads:

Well, hopefully that has whett your appetite! If you are interested in the rest of the journey, check out this video!

Share
Back to The Creative Contessa Blog
Newer Post
Access Denied
IMPORTANT! If you’re a store owner, please make sure you have Customer accounts enabled in your Store Admin, as you have customer based locks set up with EasyLockdown app. Enable Customer Accounts

The Creative Contessa - Join the Club

A place for people to discover the beauty of creativity, including dance, historic fashion, sewing and embroidery, the culinary arts, sustainable living, and medieval & Renaissance life!

© 2023 The Creative Contessa. Powered by Shopify